The Ministry of Youth and Sports has congratulated the Black Galaxies, the technical and management teams for their victory against Sudan on Thursday.

The Ministry described Ghana’s win in the second group match as “well-deserved”.

Ghana came from behind to win the match with three goals from Konadu Yiadom, Daniel Afriyie Barnieh and Seidu Suraj.

The victory seems to have put the Black Galaxies in a good spot after Madagascar who leads by six points in Group C in the African Nations Championship (CHAN) tournament.

Ghana conceded a goal after the 31st minute through Sudan’s Nooh Al Gozoli.

In an interview with David Abangna who was crowned Man Of The Match, he said the team had to pull itself together to confront what seemed to be the end of the road for Ghana.

“We needed to psych each other because it was a make-or-break affair for Ghana’s team. We just needed to keep working and stay focused”, he told the media after the match.

Ghana’s first group match in the tournament against Madagascar ended up in a 2:1 defeat.

In its congratulatory message, the Ministry of Youth and Sports assured the team of the country’s support and prayers.

“The Ministry wishes to assure you of its total support throughout the tournament as we believe in your ability to excel in the competition and make the nation proud. The entire nation is solidly behind you with prayers and support in your next match and subsequent ones.”

It urged the team to put up a fierce fight to lift the flag of Ghana high in subsequent matches. 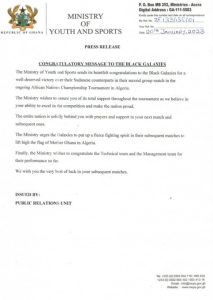 Sudan is now at the bottom of Group C with just three points.

Sudan will face Madagascar on Monday and the outcome of the match will determine Ghana’s fate in the tournament.

Over 15,000 Trained Teachers Posted By NSS Begin In February