Nigerian actor and comedian Basketmouth has announced the decision to end his marriage with his wife, Elsie Uzoma.

The comedian made the announcement on his social media pages with the caption, “for the first and the last time.”

The couple is breaking up after twelve years of marriage.

They have three kids together.

Basketmouth “painfully” chose to announce the news on social media because, he said, it was an “unavoidable situation”.

According to him, the decision to end their marriage was a “difficult” one taken after deliberations with his wife.

“As we move forward separately, we will continue to work to give our beautiful children all the care, love, guidance and support they need”, the statement said in part.

He, however, did not communicate what was necessitating their decision. 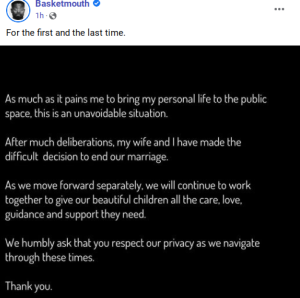