The Ministry of Youth and Sports has carved out two strategies to curb the low turnout at various stadia during Ghana’s Premier League matches.

The measures were woven during a meeting convened by the sector Minister, Mustapha Ussif with the leadership of the Ghana League Clubs Association (GHALCA).

JoyNews reports that 950 spectators purchased tickets to watch the match between Kotoko and Bechem United on Boxing Day at the Baba Yara Sports Stadium.

It also reported that 48 people purchased tickets to watch the game between King Faisal and Nsoatreman FC at the Kumasi Sports Stadium in the Ghana Premier League on January 1.

Ghana Web also reports that only 188 tickets were bought for the Hearts of Oak game against Tamale City on January 8.

This is affecting not just the local football clubs but the National Sports Authority (NSA) as well.

“It’s a serious headache to the Authority and the burden is on the NSA because when there is a low turnout, we tend to lose so much. To keep the place neat, tidy and then the pitch, the problem is how to get funds to maintain the place.

“The pressure is on NSA when the spectatorship is that low and we are not part of the sponsorship money of the GFA that, when spectators are not coming, use this to maintain the place.

“This month’s light bill was GHS 14,000 so if we play and we get zero and Kotoko’s FA Cup game against Bechem United you get GHS 500, you see that within a month, we are losing so much. So, it’s a huge problem that as soon as possible, the FA, the ministry, NSA, we should just sit quickly and see how best we can address the situation”, the Ashanti Regional Director of the NSA, Emmanuel Kojo Appiah is quoted by JoyNews to have said.

In addressing this, the Ministry of Youth and Sports and the GHALCA have decided to consult all relevant stakeholders for their input.

“Further consultations would be made with all stakeholders including Ghana Football Association (GFA), Ghana League Clubs Association (GHALCA), the National Sports Authority (NSA) and supporters for their inputs on the strategy to be adopted to address the situation.”

In addition to that the Minister encouraged the public to patronise to enable the local clubs to gain the needed funds to grow. 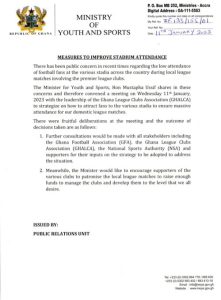