It has emerged that government did not have any discussion with the leadership of University Teachers Association of Ghana (UTAG) before taking to announce churches and schools for final year students to be resumed in June 15, 2020 as part of measures to ease the restrictions introduced to slow the spread of the deadly COVID-19.
“The last time we have discussion with any the government was about two-three weeks ago. It wasn’t about the reopen. Maybe  that consultation was done with other teachers unions like GNAT, NAGRAT, CCT”, UTAG national president, Professor Charles Marfo revealed. 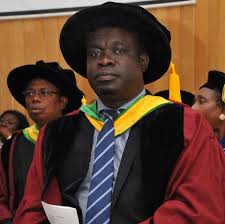 UTAG national president, Professor Charles Marfo
According to him, though, the President, Nana Akufo-Addo did not sought UTAG’s view before the reopening of the Universities, members are ever ready to teach students irrespective of any reasons.
“We cannot say the decision is good or bad but we are ready to comply with the President’s directive”, the KNUST Lecturer spoke on Manhyia-based Opemsuo FM morning show hosted by George Opoku Mensah Agudey.
The President of the University Teachers Association of Ghana Professor Charles Marfo is of the view that mass testing lecturers and students for COVID-19 would go a long way to assure community members as lectures for final year students are set to begin on June 15.
Prof Charles Marfo noted that even though he did not know the strategies government was going to put in place to safeguard lecturers and students as yet, it would be prudent to engage in mass testing.
He noted that even though the exercise would be costly, its an area government should put in some more effort if that is what has to be done to proceed.
SOURCE: OPEMSUO.COM

KOTOKO: Chairman apologies to OTUMFUO and Board Members after passing comment on Management

How Many Times Can You Wear Pyjamas, Jeans