Ghanaian Reggae musician Blakk Rasta has returned all award plaques he has received from Charter House, organiser of the annual Ghana Music Awards.

In a letter addressed to the Chief Executive Officer of Charter House, the Barack Obama hitmaker said he is no longer proud of the awards as it “falls short of merit and decency”.

He explained that he has gotten a new conviction which is driving his decision to return the award plaques.

“Sir, I am of the new consciousness that these awards which were and are still based on paying to vote to win were/are a way of selling the awards to the HIGHEST BIDDER”.

Aside from returning the plaques, he wants his name “expunged” from their records.

He concluded, “much as I appreciate your effort in appreciating people, this falls short of merit and decency. I ask respectfully that you desist from nominating me in the future unless this unfortunate criterion changes to TRUE MERIT AWARD Standards.”

Blakk Rasta is known for criticising Charter House over the Ghana Music Awards.

In 2008, he was banned by the organiser for three years for his “cruel” and “unprofessional” criticisms.

After the ban was lifted, his “Miss Right” was crowned Reggae Song of the Year at the 13th edition of the Ghana Music Awards in In 2012. 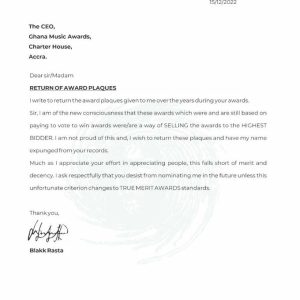