The National Democratic Congress (NDC) has appointed the Member of Parliament for Ajumako-Enyan-Essiam Constituency, Cassiel Ato Forson in place of Haruna Iddrisu as Minority leader.

This was contained in a letter addressed to the Speaker of Parliament by the General Secretary of the party, Fiifi Fiavi Kwetey.

This brings an end to Haruna Iddrisu’s reign.

He is not the only one affected by the secateur of the NDC but also Hon. James Klutse Avedzi, Deputy Minority Leader and Hon. Mohammed-Mubarak Muntaka, Minority Chief Whip.

According to Kwetey, the changes in the Party’s Parliamentary leadership are meant to position the party for the 2024 Elections.

Cassiel will now be assisted by Kofi Armah Buah as the Deputy Minority Leader.

“The new leadership will be in charge to recommend consequential changes in the ranking membership to headquarters of the party for approval”, a part of the letter to the Speaker said. 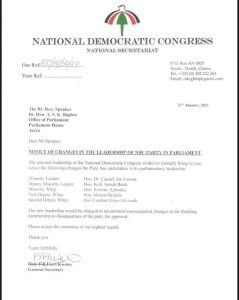 In a letter to Klutse Avedzi, the NDC Secretary said he was being redeployed.

The letter explained that the move had become necessary.

“It has become necessary for you to deploy you from your current position as Deputy Minority Leader with immediate effect,” a statement signed by General Secretary of the party Fiifi Kwetey said. 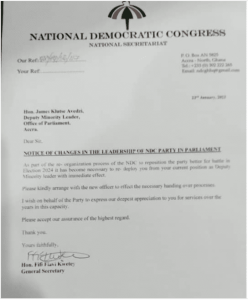 According to a screenshot of a post attributed to Ibrahim Murtala Mohammed, MP for Tamale Central, the leadership of the party did not consult the Minority Caucus before putting out the communication. 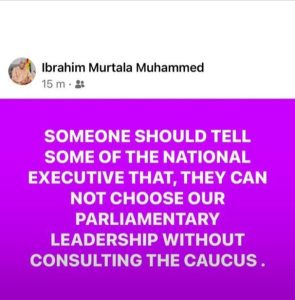 The development has shifted Haruna Iddrisu to the second most trending position on Twitter.

Whereas some NDC supporters on Twitter have accepted the development, others believe it will advance the ruling New Patriotic Party’s quest to retain power in the upcoming elections.

“What MAHAMA IS DOING WILL ACTUALLY HELP NPP and Alan KYEREMATEN to break the 8, scary time ahead.. “, one said.

What MAHAMA IS DOING WILL ACTUALLY HELP NPP and Alan KYEREMATEN to break the 8, scary time ahead.. "

Another posted, “Thank you Hon Haruna Iddrisu for your Leadership. We move regardless!”

Thank you
Hon Haruna Iddrisu for your Leadership. We move regardless!✊🏿 pic.twitter.com/veRz38wBgd

For Barker Oliver Vormawor, the party’s decision is ultra vires.

“NDC as a Party has no legal standing to change leadership of the minority caucus in Parliament. The letter is incompetent. The decision to elect leadership must be made by the Caucus not the Party. Fifi Fiavi Kwetey should withdraw the letter. If this is a caucus decision, the caucus must inform Speaker”, he posted on Facebook.