The Office of the Special Prosecutor has charged four persons for their roles in procurement breaches at the Northern Development Authority (NDA).

This comes after the OSP released a report of its investigations into the GHc 10 million forgery saga saddling the NDA in relation to the award of a contract to A&Q’s Consortium (A&Q’s).

Per the findings, Mr Abdul-Rahman, Mr Engmen and Mr Seidu, in their various capacities, actions, and positions, pushed through and approved or contributed to cause the approval of invoices from A&QS for payment, without lawful authority.

A press statement from the OSP said, Mr Abdul-Rahman, Mr Seidu and Mr Kuundaari have been charged with a count of conspiracy to directly or indirectly influence the procurement process to obtain an unfair advantage in the award of a procurement contract.

On the other hand, Mr Engmen has been charged with two counts of the same offence. 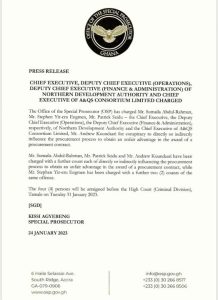 Background
A letter dated January 27, 2022, from the former Acting NDA CEO, Alhassan Sulemana Anamzoya to the Chief of Staff at the Presidency said his signature had been forged in the award of a contract to A&Q’s Consortium (A&Q’s) in the sum of ¢10,400,000 under the Infrastructure for Poverty Eradication Programme (IPEP),

The forgery, he said, was done while he was in office.

He noted in the letter that the only contract he signed with the consortium in question was on January 28, 2020, and at a sum of GHc5, 720,000 after the Public Procurement Authority gave the approval to use sole sourcing to recruit A&Q’s Consortium for the purpose of the IPEP.

He added, “even though the award letter I signed has an amount of GHc5, 720,000, I have sighted a doctored version of the award letter which indicates I purportedly signed Consultancy Supervision Contract with A&Q’s Consortium under the IPEP at a cost of ten million four hundred thousand (10,400,000) cedis.”