Welsh captain Gareth Bale has retired from international football at the age of 33 years.

He announced this on social media on Monday.

In a statement addressed to his countrymen, the winger admitted the decision is the “hardest” he’s had to make concerning his career.

He is a five-time Champions League winner and; Wales’ top scorer and most-capped player.

He featured in Wale’s national team at the 2022 World Cup tournament in Qatar where he captained. The country, however, exited the tournament at the group stage.

“How do I describe what being a part of this country and team means to me? How do I articulate the impact it has had on my life? How do I put into words the way I felt every single time I put on that Welsh shirt? My answer is that I couldn’t possibly do any of those things justice simply with words.

“But I know that every person involved in Welsh football feels the magic and is impacted in such a powerful and unique way, so I know you feel what I feel without using any words at all”, Bale said in his statement.

The former Southampton, Tottenham Hotspur and Real Madrid player said his involvement in the Wales football team has transformed his personality and “given me something incomparable to anything else I’ve experienced”.

He added, “I’m honoured and humbled to have been able to play a part in the history of this incredible country, to have felt the support and passion of the Red Wall and together have been to unexpected and amazing places.

“I shared a dressing room with boys that became brothers and backroom stuff that became family. I played for the most incredible managers and felt the undying support and love from the most dedicated fans in the world.”

Appreciating the efforts of the country, Bale highlighted he is “stepping back” and not “away from the team that lives in me and runs through my veins after all the dragon on my shirt is all I need”. 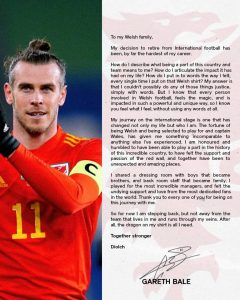