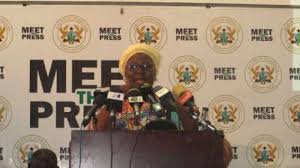 The Local Government and Rural Development Minister, Hajia Alima Mahama says John Dramani Mahama met with the wrong Assembly Members Association.
Former President of Ghana, His Excellency John Dramani Mahama last week met with the Ghana Association of Assembly Members.
At the meeting, the former President who is seeking a second mandate promised to pay allowances and also build the capacities of Assembly Members across the country to ensure that they are effective in their respective communities.
He said these allowances will be paid after the elephant-sized Government has been done away with to provide resources that will be used to provide allowances for Assembly Members.
But speaking at a sod-cutting ceremony of a project under the Ghana Secondary Cities Support Program (GSCSP) in New Juaben South Municipality of the Eastern Region by President Akufo-Addo who is on a working tour in the Region, the Local Government Minister explained that “I understand the former President, John Mahama met with the GAAM which is not an official association of Assembly Members to start with and he promised that when he wins which is not going to be the case he is going to pay Assembly Members a monthly allowance or salary”.
She stated “to start with, the association that he met was formed when he was the President and they were prevented because they were told that there is a recognized assembly members association that is the National Association of Assembly Members of Ghana (NALAG), they prevented them, the New Patriotic Party (NPP) is democratic, we have allowed freedom of association and now the NDC is meeting them instead of (NALAG)”.
She stated that “I want to tell you that, John Mahama’s promise to pay assembly members was in their manifesto in the 2012 elections but he didn’t do anything about it. Now they have no argument against the bravest performance in decentralization and local development, so they are now promising ‘rooftop promises’ that they cannot offer”.
The Minister further added “Mr. Mahama was not able to pay assembly members about 10,000 in number, nurses and teachers allowances, so would you expect him to put 10,000 Assembly Members on the payroll. He knows it is impossible, the real situation is that the way the decentralization scheme has been designed, they are like a Board of the Assembly and are not a full-time employee”
Source: News Desk

Factual: Ghana Has The ‘Most Credible’ Voters Register – NPP