Man Arrested For Impersonating A Lieutenant

A young man is in the grips of the Criminal Investigation Department (CID) of the Ghana Police Service for allegedly impersonating a lieutenant.

He was arrested by some military police officers, the GAF disclosed.

The suspect is identified as Rufai Abubakar.

He was arrested when he stormed Burma camp and tried to access the military installation in a military camouflage uniform decorated with fake LieutenantColonel ranks, the GAF reported.

He is said to have entered the Camp in a commercial vehicle, alighted at the Bus Stop and headed straight to the Air Force Base.

He told guards on duty he was stationed at the Northern Command and was heading to the Air Force Base to book a flight to Tamale.

The Ghana Armed Forces (GAF) in a statement said Rufai confessed he was impersonating after an interrogation.

“At the time of his arrest, the suspect had in his possession a fake military identification and business cards and other documents bearing his name”, it said.

A follow-up search by military police at his residence at Ablekuma Fan Milk and Olebu led to the retrieval of documents, several certificates and fake Ghana Armed Forces recruitment application summary reports bearing names of defrauded persons, military uniforms and accoutrements and a toy pistol, the GAF said.

He has been handed over to the CID for investigations, however, the GAF fears he succeeded in making a lot of people believe he was indeed military personnel including his two wives.

“Considering that his two wives living at Ablekuma and Oleby respectively were under the false impression that their husband was a real military officer, it is possible that many other persons may have fallen victim to his impersonation and fraudulent activities”. 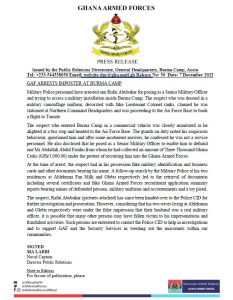