Ghana’s opposition leader John Dramani Mahama and Kenya’s Raila Odinga have expressed their joy over Morocco’s performance on Tuesday that qualified the Atlas Lions into the quarter-final stage of the World Cup.

The two leaders took to their separate social media accounts to express their delight at the team’s performance.

Morocco remains the only African country in the tournament now.

On Tuesday at the Education City Stadium, Morocco defeated Spain in a penalty shootout following a goalless 120-minute game.

Morocco succeeded on its first two penalty kicks, while Spain missed its first two. Both teams missed their third kicks but Morocco put the game away on its fourth kick.

Their historic win also makes Morocco the first Arab team in World Cup history to make it to the last eight.

In reaction to this, the 2020 flagbearer of the opposition National Democratic Congress (NDC), John Mahama lauded Morocco goalkeeper Yassine Bounou for the saves he managed during the shootouts.

He posted “Viva! Morocco! Africa is proud of you! Great goal-keeping Bono.” 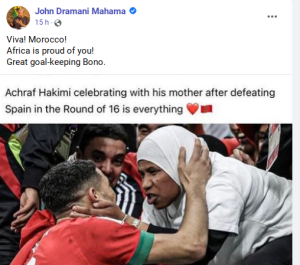 In a tweet he said, “Wow, Morocco’s Atlas Lions commendably gave their all in a thrilling encounter, carrying our continent’s hopes and dreams into the next round.

“Congratulations to them for their outstanding grit and teamwork. Great job!”

Wow, Morocco's Atlas Lions commendably gave their all in a thrilling encounter, carrying our continent's hopes and dreams into the next round.

Congratulations to them for their outstanding grit and teamwork. Great job! pic.twitter.com/jOTOL4wIGg

Morocco will now face Portugal in their next match.

Gold Refinery Owner, Two Others Remanded Over Scam And Robbery