Pressure Group Occupy Ghana has proposed Presidents be stripped of immunity to income tax charges as stated in Article 68(5) of the 1992 Constitution of Ghana.

The proposal was among ten recommendations the group suggested to generate revenue in the country.

This was part of their take on the government’s announced Domestic Debt Exchange programme which was unfolded by Finance Minister Ken Ofori Atta earlier this week.

The country’s debt as of the end of September 2022 stood at GH¢467,371.31 million (US$48,871.34 million) according to provisional results. A debt sustainability analysis by the Finance Ministry showed that Ghana’s debt is unsustainable.

On Sunday, Ofori Atta announced a domestic debt exchange programme that will transition the country to debt sustainable levels.

The group blamed the “Government’s failed, risky economic strategy that borrowed heavily from the international market to fund expenditure, pay maturing debt, support the cedi and possibly control the effect of the depreciation on inflation” for the state of the country. 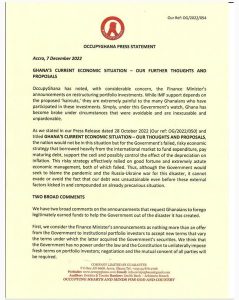 It said, “This risky strategy effectively relied on good fortune and extremely astute economic management, both of which failed. Thus, although the Government would seek to blame the pandemic and the Russia-Ukraine war for this disaster, it cannot evade or avoid the fact that our debt was unsustainable even before these external factors kicked in and compounded an already precarious situation.” 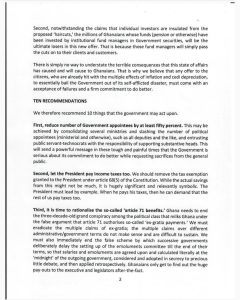 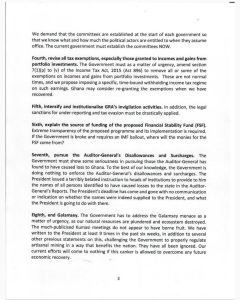 Among them, it stated reduction in the number of government appointees; removal of the President’s immunity to income tax; rationalisation of Article 71 office holders’ benefits; review of all tax exemptions; intensification and institutionalisation of GRA’s invigilation activities.

It also suggested the pursuit of the Auditor-General’s Disallowances and Surcharges; ending galamsey; halting the government’s critical projects; and rationalisation of the President’s Flagship programmes.

It concluded, “In conclusion, a Government that is pleading with Ghanaians to bail it out of a self-afflicted disaster, must ‘bear fruits worthy of repentance.’” 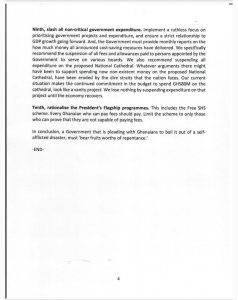 Man Arrested For Impersonating A Lieutenant